In November 1885, a package arrived at the Young Men's Association, a predecessor of the Buffalo and Erie County Public Library (BECPL). The parcel from Hartford, Connecticut contained approximately half the manuscript (487 leaves) of the recently published and controversial novel, Adventures of Huckleberry Finn. Mark Twain gave the manuscript to the library after receiving a letter from library curator James Fraser Gluck. He believed the first half had been destroyed by the printer.

At some time after November 1885, Twain found and sent 209 additional leaves. Regrettably, even with these additional pages, the manuscript was still incomplete. The fate of the first half would remain a mystery for over a century.

An astonishing discovery was made in October 1990 in Hollywood, California. The first half of the manuscript was found in a steamer trunk in the attic of one of Gluck's granddaughters. Through the diligent research of staff at the Mark Twain Papers in the Bancroft Library at the University of California at Berkeley, it was discovered that some time in 1887, Clemens found the first half of the manuscript and had it delivered to his old friend and partner Josephus N. Larned, then Superintendent of the Buffalo Library, another predecessor of the BECPL. Larned sent a letter acknowledging that Twain had fulfilled his intention to present the Buffalo Library with the entire manuscript. Gluck most likely removed the newly arrived portion from the library in order to have it bound, but failed to have this done. He died unexpectedly in 1897 and the manuscript leaves were presumably turned over to his widow. She moved to Hollywood in the late 1920s. 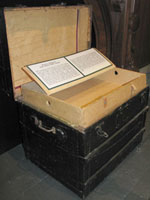 Mr. Gluck's granddaughters turned over the manuscript leaves to an auction house in New York City. Upon learning of the manuscript’s survival and the letter proving that it had been sent to the Buffalo Library in 1887, the Buffalo and Erie County Public Library asserted its claim. An agreement was reached by the BECPL, the Gluck family and the Mark Twain Foundation after many months. The two halves were reunited in Buffalo on July 28, 1992 – 105 years since the last time they had been together.